What is Left-Behind Children Ministry? 什麼是留守兒童事工?

We care about needy children in China – 我們關愛中國兒童！

In recent years, due to migrations of the workforce in Mainland China, a new social phenomenon has surfaced – one that was never seen in Chinese history – Tens of millions of children have become “orphans with parents”. They are the “Left-behind Children”.

At present, there is an estimate of over sixty millions Left-behind Children in China. In order to make a living, their parents had left their hometowns for work, handing these children over to the care of grandparents or neighbours. On average, these parents would return home to see their children once a year, and in some cases, once in a few years.

Without proper supervision, Left-behind Children tend to form gangs and wander about. Disturbingly, on average, tens of thousands of them died in accidents each year, while countless girls between the ages of 10 to 15 were sexually assaulted. More commonly, especially during summer holidays, youths would indulge in online games, pick up bad habits, become addicted, and lose motivation for their studies. Not surprisingly, feeling being abandoned by their parents, numerous younger children may suffer from anxiety, insecurity issues and low self-esteem.

For thousands of years in the past in China, despite hardship and adversity, children would stay with their parents. Today, however, this has changed in China! The Left-behind Children, not having parental guidance and support, are gravely impacted in their development physically, mentally, emotionally, socially, academically and ethically. This would become a severe, impending crisis for the Chinese society! A Chinese proverb says, “Strong youths build a strong country; wise youths shape a wise nation.”  Whether this large group of Left-behind Children would become the burden or the hope of our country rests on how we actively participate to love and care for them.
Are you willing to go with us to care for them? 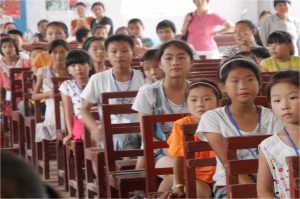